Isaac koi comment: Frank Hadl took a photo of that "alien"/mummy in December 1956 when he was in the Air Force - and annotated it as being a "mummy, at Montezuma Castle" and recorded the date of his photo as well ("12/56"). Label your slides people...
Following up on Anthony Bragalia's post mentioned above giving a link to a Picasa web album, I contacted the owner of that web album today. Her husband (Frank Hadl) emailed promptly emailed me and confirmed that he took the relevant photo in December 1956.

Note: It seems the Picassa album have been removed by the owners.

Add-on 10 June 2015: A photograph of the mummy have been found.
Add-on 11 June 2015: New Confirmation for Photograph of the Roswell "Alien"
Add-on 13 June 2015: Shepherd Johnson obtained by FOIA several pages of our mummy documentation, including a photograph (around p.176) from 1939.
In our previous articles (first, second, third + 4th ones) we have seen the so-called Roswell slides are images that a group of UFO promoters – including Anthony Bragalia, Jaime Maussan, Adam Dew, Donald Schmitt, Tom Carey, and Richard Dolan – put forward at an event held on May 5, 2015, in Mexico City, as proof positive of an extraterrestrial crash at Roswell in 1947 and the recovery and cover-up by the US government of alien bodies. These are claims that most of the aforementioned group have been making for over two years now. They have repeatedly said that the best experts they could find were examining the slides, and that they had determined the slides were of unearthly origin.

Nothing could be further from the truth. As many skeptics have been saying since the first rough image of one of the slides was procured several months ago as a screen capture from a promotional video released by Dew, the figure photographed and shown in the slides is almost certainly a mummified body.

We can now remove the word “almost” from the aforementioned sentence. The key to solving the mystery was in the placard seen in the slides in front of the body, a placard that the slides promoters assured everyone could not be deciphered despite extensive examination. Here is what Don Schmitt said on April 12, 2015:

This will be part of the event, part of the program in May, that all of these analytical reports, all of the analyses, all of the main experts as well as the photographic experts who examined- there’s a placard, very fuzzy, that can not be legibly read by the naked eye, yet we’ve had everyone from Dr. David Rudiak, to Studio MacBeth, even the Photo Interpretation Department of the Pentagon, as well as Adobe have all told us that it’s beyond the pale, that it cannot be read, it is totally up to interpretation.So, we truly feel we have performed due diligence; we have done everything we can to substantiate and prove what is contained within these slides, whether it is something of a human malady or something truly extraordinary.

Tom Carey was interviewed about the Roswell Slides on the March 22, 2015 episode of Jaime Maussan’s Contacto on Tercer Milenio TV. Carey said that experts have been able to read some words on the placard on the case and that, “debunkers will be disappointed.”

It took us just a few hours to prove otherwise, once we received a high resolution copy of one of the slides (note: while our copy came from an inside source within the promoters’ group, slides promoter Adam Dew has now released it as well).


By using the commercially available SmartDeblur, a member of our group (Nab Lator), was able to significantly clear up the blurred text. Other members of the group helped narrow down the actual words.The first line was the most clearly resolved:

There is no reasonable doubt that this is the true and correct text.

The other three lines of the text are more difficult to decipher, but seem to say something like:


MUMMIFIED BODY OF TWO YEAR OLD BOY
At the time of burial the body was clothed in a xxx-xxx cotton
shirt. Burial wrappings consisted of these small cotton blankets.
Loaned by the MR. Xxxxxx, San Francisco, California

The entire effort only took hours, quite a difference from the “years” of research claimed by the slides promoters. The fact that the promoters did not release proper high resolution scans of the slides made our work more difficult, but in the end it was still relatively easy to decipher the key parts of the image.

The mystery of the placard is solved, and so is the nature of the body.

It was a boy, from Earth.

The question that remains is whether or not the Slides promoters have been deliberately deceiving the public in order to profit financially, or whether they were simply incompetent. Perhaps it was a mixture of both. Either way, their credibility as investigators and researchers has been destroyed.

More lecture in Curt Collins excellent site: The Placard of the Roswell Slides: The Final Cutain. a special rush report of the Roswell slides Research Group.

See this new add-on (May the 10th) of our RSG team, including videos: How to Decipher the Roswell Slides Placard.

THE “ROSWELL ALIEN SLIDES” AND MY APOLOGY TO A DEAD CHILD OF THE MESA VERDE by Anthony Bragalia & followed by Don Schmitt, May the 14th.


ID Confirmations by "Roswell Slide Research Group" and All...


"The body is well mummified, but small patches of skin are missing and the lower part of the right leg has disappeared."
we read in Region III Quarterly Volume 2 - No. 1   January, 1940;  HUMAN PRUNES By Don Watson,Park Naturalist, Mesa Verde National Park.

Compare as I did now with one the slide presented by one the forensic sciences "experts" during May the 5th conference:

We read also in the scientific paper: "Part of a small slip-over cotton shirt still hangs around the shoulders." Compare again: 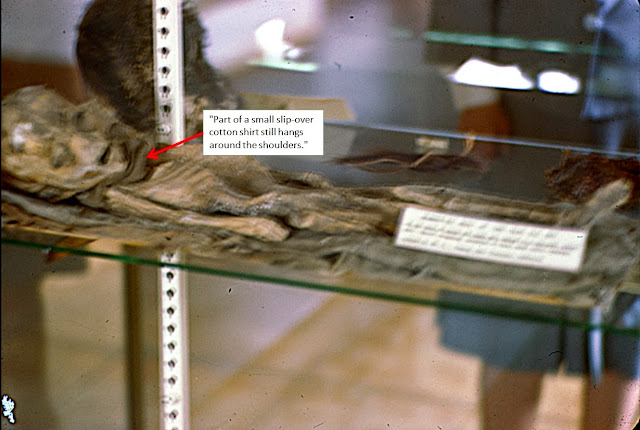 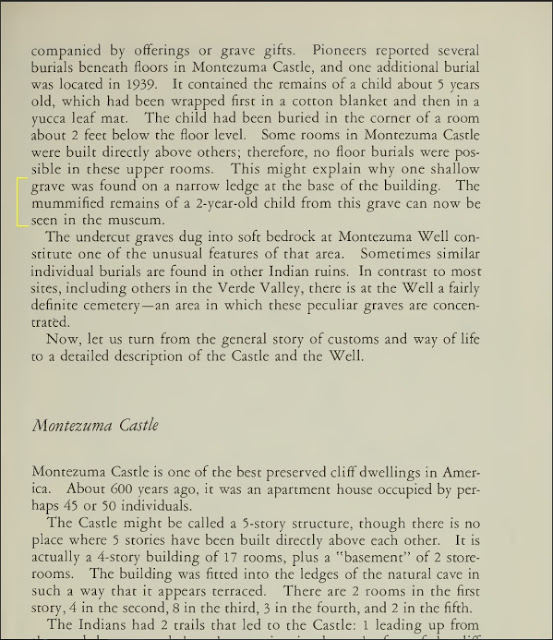 Mortem Foray shared the following video in a blog, video titled Mesa Verde Archaeology Colorado - Early 20th Century - Montezuma Castle Dig - Silent.
Looking at some artefacts exhumed in the video, we can compare with some artefacts visible in the slide. Such artefacts are probably samples of native "objects made of Yucca fibre or cotton":

Cotton and yucca fibre artefacts have been exhumed in the past, not only in Mesa Verde (Colorado), but in the vicinity of Aztec (Arizona) too:


For further reading, I recommand the following article: ID Confirmed: the Roswell Slides Mummy of Mesa Verde, by Curt Collins. As Anaysis of the "Roswell Slides" FAQ by my good friend Nab Lator.

Hear this interview of Donald Schmitt (and Richard Dolan) before the show of May the 5th, and compare to what we know few hours or days after :


And an ironic wink to investigator Tony Bragalia, one the mummies exhumed in Mesa Verde vicinity was nicknamed by the scientifics... "Tony".

On a side note: It was a team effort and more, by team including anomalists, skeptics, amateurs from several fields not really concerned by "UFO" and people not totally sharing the same opinions about the UFO phenomenon, but able to share all and work together. A sort of real DreamTeam, then?!

The Roswell Slides Research Group are:

Thanks to our colleagues and associates Alejandro Espino, “Trained Observer”, Philippe Hernandez, Aaron J Gulyas, Irna France, Nick Redfern, and Fin Handley, as well as many, many more who offered help.

great work, if u want help, call me, im a phototechnician ;)

Great work! Thank goodness there are good people like you doing great work. I'm hoping that all of the participants in this fraud suffer some sort of consequence, like loss of revenue. These hoaxers need to find a new line of work.