Seven Points to doubt that UFO and IFO are of different Natures: Then a simple Difference of Degree?

This short article is an abstract of four years of this blog and 16 years of personal immersion in the UFO microcosm.

The hypothesis defended by UFO-Skeptics is that the phenomenon can be reduced to multiple and composite prosaic stimuli and cognitive mechanisms. Then, the terms Composite and Reductionist Theory (CRT) of the UFO Phenomenon or the SocioPsychological & Cultural Hypothesis of the UFO Phenomenon (SPCH) were coined, in particular by French and English ufologists.
It finds its roots in several findings, and a non-exhaustive list might be the following.

2) The a priori high strangeness contained in UFO narratives or drawings made by witnesses does not imply Fortean stimuli and mechanisms are at play in the sightings made and is not sufficient and reliable evidence to support or to prove extraordinary theses, like Extra-Terrestrial beings visiting us, as inter-dimensional visitors, or as time-travelers, as to be imputed to an omniscient intelligence possessing a manipulative or insidious behavior, etc.

3) The unexplained cases have no unique peculiarities. Exactly the same patterns and the same characteristics appear in both explained (IFO corpus) or unexplained (UFO corpus) cases. We can state that the two corpora are more or less "twins".
There exists in the explained (IFO) corpus conventional and mundane stimuli which have generated all the aspects, parameters and contents contained and alleged in the unexplained corpus (UFO): from the simple ones, including shape, color, speed, size, duration, a priori reliable witnesses, etc.; all socio-economical classes (including pilots) are involved, multiple or single witnesses cases, etc. ; to the more complex ones, including an alleged intelligent behavior, pursuit, interferences and physiological or physical effects to the witnesses, to the ground or to instruments (radar) as domestic devices (radio, TV, car, etc.), a priori high level of strangeness in the narrative, drawing, photography or video.
In a previous article, or during my previous public lectures, I proposed several explained cases (narratives, photos or videos) as a recreation in order people realize that if they are not able to solve and to find the mundane explanation of the proposed cases, it doesn't mean extraordinary entities are at play when you can't solve a case (see the 8th section here after about "the syllogism of ufology").

4) There exists a continuity between the trivial (asserted by IFO cases) and the extraordinary (UFO or residual cases proposed by ufologists): for both, as summarized before, the characteristics and parameters alleged seem in reality in a perfect continuity, but their peripheral location is not perceived as such because ufologists remove the more central part of the curve, where the less strange phenomena are identified by the witnesses themselves or by the field investigators. Ufologists, Monnnerie says, arbitrarily call the minor misinterpretations ‘false UFOs’ and the major ones ‘true UFOs’, and do not realize that there is a perfect continuity between the two series. That's a reason UFO-Skeptics propose that the difference between UFO and IFO may be of degree not of nature. 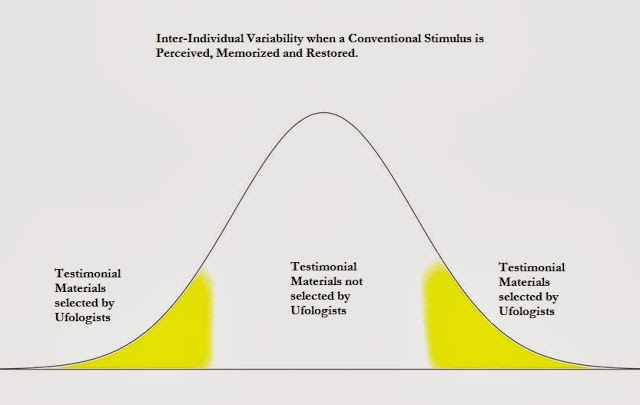 5) There are similar corpora where it exists unexplained or unsolved cases. Such corpora are for example murders, disappearances, kidnappings, rapes, domestic incidents or accidents (planes, cars, home devices), forest or home fires, etc. The presence of residual cases in such corpora have not as consequence that if a percent of residual cases exists, it is because entities, stimuli and mechanisms between unexplained and explained cases are different in nature and at play in the unexplained and residual corpora and why forensic or classical sciences and methods can't solve it. James Oberg already wrote in the 80's:

Since some airplanes and automobiles crash without explanation, are extraterrestrial traffic saboteurs at work? Since a good fraction of murders remain forever unsolved, are psychotic time-travelling killer-robots at work? Surely not, of course -- it's absurd even to suggest such ideas. But how far afield is the analogy to the evidential value of "unsolved" UFO cases?

The reasons that some and numerous cases remain unexplained and unsolved are or may be in reality numerous and logical, but mundane: the lack of the good information, of the good element, of the good expert, of luck, etc. In the case of ufology, many ufologists recognize that if one or another case has been solved, it is due to luck or accident. The presence of residual cases is intrinsic and statistically logical and expected: it does not mean that if cases are unsolved, it is because extraordinary entities must be involved, or different causes are at play between unexplained and explained corpora. It is another reason why UFO-Skeptics propose that the ufological corpus may be in fact in this intrinsic characteristic and component already shown and evidence by/in such other corpora. Hudson Hoagland in Science (1969) already said about ufology and residual cases:

There will always be cases which remain unexplained because of lack of data, lack of repeatability, false reporting, wishful thinking, deluded observers, rumors, lies, and fraud. A residue of unexplained cases is not a justification for continuing an investigation after overwhelming evidence has disposed of hypotheses of supernormality, such as beings from outer space... Unexplained cases are simply unexplained. They can never constitute evidence for any hypothesis. 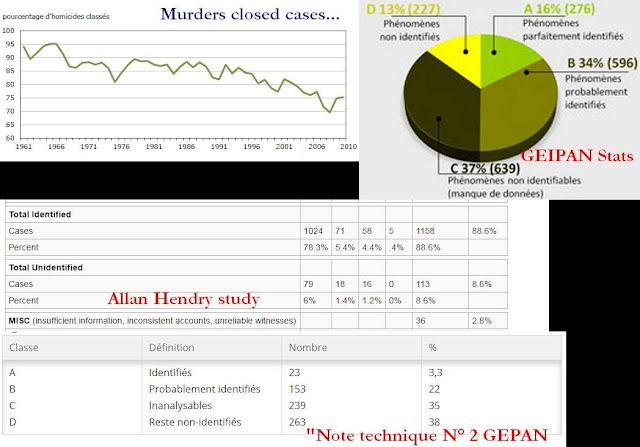 6) In our previous blog articles, we have shown that some cases presented by ufology as the best ones, so solid a priori (and maybe understandably) that only the ExtraTerrestrial Hypothesis (or extraordinary ones) must be invoked and the most reasonable explanation to retain, have been solved or explained. Again, the switch of such solid cases from the unexplained corpus (UFO) to the explained one (IFO) must engage investigators to be very cautious when they use the unexplained status of cases to defend or to depend upon extraordinary theses, entities, mechanisms.

7) Ufology seems only to lead and have as foundation of her (weak?) edifice the following "argument":  If some UFO reports cannot be solved, then their stimulus must be extraordinary and Fortean in nature. Or, as James Oberg (Ibid.) expressed decades before:

The syllogism, to repeat, goes like this: Since some UFO reports cannot be solved by amateur investigators working in their spare time, then there must exist extraordinary stimuli behind some UFO reports. As a technique of analysis, invert the syllogism to create a new one of equivalent Boolean value. It now reads: if all UFO reports were caused only by ordinary stimuli, then amateur investigators working in their spare time would be able to solve every one of them. Worded this way, the syllogism is arguably untrue (there are numerous counterexamples of cases which happened to be solved only by "accident"); its untruth implies untruth for the first equivalent assertion, championed by UFO proponents.

In essence, why cant the residual cases be of the same nature as the resolved cases, since, in reality and to date at least, there are none discriminating criteria (color, size, behavior, duration, speed, form, etc.) that make it possible to objectively discern the two corpora, if the status only, explained versus unexplained?

===> UFO and IFO cases, Then a simple difference of degree?