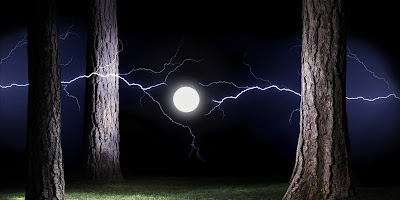 
Ball lightning studies suffer from the same defects that typify ufology. Their catalogues are littered with ill-investigated cases.

The other day, I was watching one of the documentaries released by CNES/GEIPAN and series called Juste Ciel.  In general, I found them really good or excellent.

And concerning at least two of them, I said in my mind Good Heavens!

The short documentary in French is available here, therefore in CNES site !

Experts fooled by a CGI video.
At about 56 seconds, you have an excerpt of a video. Seriously, at the very first regard because I follow for years several hoaxes and CGI UFO videos, it "smells" the CGI fake, as I was pretty sure I already saw this video in extenso years ago in another context (UFO context stricto sensu, not Ball Lightning).

I asked my friends devoted on debunking faked videos (UFO-Theater site team mates and Scott Brando Italian driving UFO of Interest FB page) because I dont remembered where I saw it.


Their answers were clear enough and very fast. The video is a CGI creation then a fake by the "famous" hoaxers and two Cousins brothers ThirdPhaseofMoon, hoax appearing circa 2012 in their YouTube channel.
Even if I must advise you that each time you open a video on their YT channel, they gain money, the video can be retrieved here.

In other words, even an or several experts in storm or "ball lightning" can be fooled by a fake. It is imho a good illustration of the argument from authority.

Ball Lightning caught on tape at Sioux Falls?
In the documentary, we find another excerpt where a ball lightning was caught on tape. Really? I well knew and recognized this video too, because I fastly "analyzed" it years ago and my opinion or hypothesis was totally different.

The full video is available here. I advise you to watch it in HD, full screen, and after using YT parameters to slow it down.

I'm not a native English speacker (as you can read here^^), but you have probably noticed too that the cameraman made a "Woooooooow". But this "wow" is not when the alleged "ball lightning" appeared, but more for a mundane (but splendid) lightning.

It is in my opinion a good indication that the "phenomenon" was not seen with the naked eyes or during the footage in live, but after when visioning the video at home, a good indication and "classic" too to focuse on other alternatives, ie an "artifact", for example something close the camera (particle, dust or insect).

When you slow down the footage and focuse on the cloud, you will see that the "phenomenon" have a "dark" precursor/speck and this at about 36s.
The following image is proposed in order you locate this dark "object" when watching again the video and these frames: 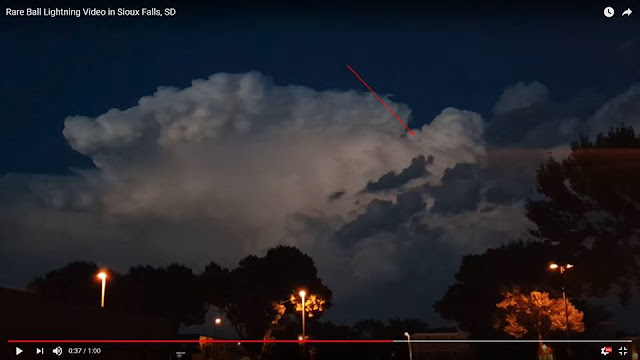 "The position, direction, timing and angular speed of this dark speck are so closely matched to those of the bright speck that it’s very hard to argue coincidence" as an analyst wrote to me.

What could it be? More probably an insect than a ball lightning. I asked several friends in several email groups and it seems a firefly is a good candidat.

After all, the video seems to have been realized in July, in dusk time, firefly is well known to have a flash pattern, which, even if I'm not an entomologist are consisting of some seconds "off" and some others "on", probably explaining then why this stimulus is at the begining dark and lighting after. 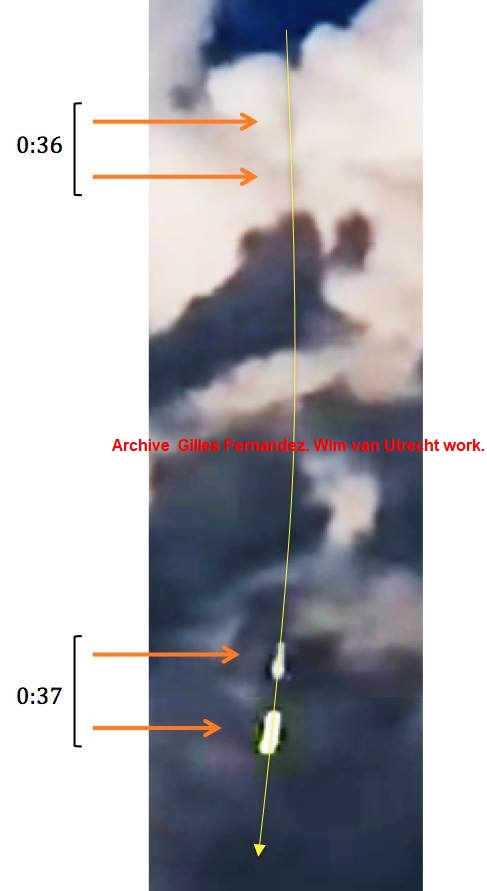 So, Ball lighting or an insect (maybe a firefly)? Let the reader decide.

I had some things to say or to propose for the others video excerpts, but probably later.

Anyway, this short documentary have really surprised me because endorsed by CNES, at least for these two videos it contains which are for me and others not ball lightning if this phenomenon really or not exists.